Since the Roosevelt era, it has been long assumed that Keynesian economics, basically Govt. spending on a huge scale, cured the Great Depression. It has been a long used mantra of the Democratic Party because their motivations were spending and redistribution. Those who know a bit more about economics will clarify that it was not spending that ended the Great Depression, but rather World War II.

Think about it–suppose you were to borrow a large sum of money via multiple credit cards. You then took that money, and rather than spend it on your own small business, were to squander it on comic books and snack foods. Sure, this will help the manufacturers of said items in the short term. But what happens when the credit runs out? Well….shhh…don’t tell the President, but it means you are broke. And while you might still want to buy comics and junk food, you are penniless. To the Keynesian the solution is to try and open up new credit cards and spend freely, hoping that at some point a miracle will happen and you will be hired by Hostess. The truth of the matter is, you are simply moving money around, and aquiring debt in the process. Eventually, your credit runs out and you are worse off than before.

If most people instead took their own money, and perhaps had a tax cut to increase the amount of money they actually had (after all, Govt is a sink hole where money goes to die) and invested it in a small business, and hired some employees, your chances of increasing your money personally increases. Of course, employed people and businesses also pay more taxes than the unemployed, so the amount of money going to the Govt naturally increases as well.

The falsity of Keynesian economics is one perpetuated by ivory-tower thinkers who have never run a business of their own. President Barack Obama is in that group. These people have a hard time fully understanding the basics of how things run, and how Capitalism increases economic activity, and how Government and taxation spoils economic activity. They think the “money tree” is debt, but it is actually small and large business that produces money via production of goods and services. Naturally, when a dollar is produced via business, that business in turn may reinvest a portion of that money on employees, expansion, or retooling. Govt spends the same money on more employee benefits with a zero sum gain.

The election of Barack Obama has exposed Leftism for what it is: basically a “pie in the sky” belief in false principles that don’t work in the real world. The President has done something that the Conservatives have had little luck in promoting, basically the falsehood of Governement as savior. Mr Obama has instead shown Government spending and taxation, and Keynesianism for what it is—the destroyer of nations.

I found it laughable that during the G8/G20 summits that the President seemed to be a man alone. European leaders, who are struggling with long-term Socialist and Keynesian principles basically told him to “go blow” as he talked about the need for spending Trillions more on so-called “Stimulus”. At the same time one might also have been scared by Obama’s stance, as it made clear his complete incompetence and shallow intellect. This man, who was to be the glory of Leftism, may instead prove to be it’s inevitable destroyer. His blind loyalty to ideology, his lack of introspection and self-correction, these are the qualities of a Dictator.

The President, if he were as brilliant as he thinks he is, would understand that slavery is a bitter pill to swallow. It takes time and a good portion of honey (provided by the media) to slowly lull the uninformed masses to bear the yoke. Instead, this foolish man has rushed out and spoken of his unlimited power, grabbed the American citizen by the wrist, and struggles to lock on the cuffs, while shouting, “You are acting…stupidly!”.

The shockwaves of this will linger for generations. And it will be spoken of in History books, about the grand dictatorial vision of a small man with oratory capability who tried to ruin the greatest nation on Earth to prove a “theory”, Keynesianism, and failed.

Above is a reprint of a DreadPirateRoberts article
Posted by ZACTech at 12:30 PM No comments:

Why am I not surprised that Americas worst president ever has got it wrong once again. Are you missing GWB yet? This loser is doing more irreparable harm in a shorter time then even Hoover did! Thank God he will be a one term President. To all of you slowing him, Pelosi and Reid down my hats are off to you all. 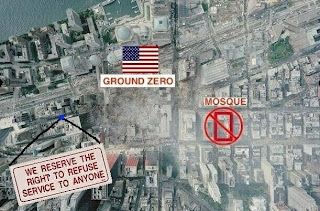 "As a citizen, and as president, I believe that Muslims have the same right to practice their religion as anyone else in this country," "That includes the right to build a place of worship and a community center on private property in lower Manhattan, in accordance with local laws and ordinances," "This is America, and our commitment to religious freedom must be unshakable." Obama said.

Atheists, Christians, Jews and Muslims all have the right to exist and live in the middle east or any where else for that matter. Fanatical Islamic psychotics sending homicide bombers into an ice cream shop killing innocent women and children must be exterminated. They are unwilling to except nothing other than Sharia law and expect the rest of us to also convert to Islam and abide by Sharia law. I for one do not have a problem defending ourselves from those who intend to harm us!
The most ironic and funny thing is that his own supporters will be the first ones exterminated under sharia law. If the Islamic Fascists win the war that they are now waging against us, negotiations are not possible with them read their own quotes and any one will see that in their own words in Arabic (as they lie and contradict themselves in English) they will only except complete victory or death.
I pulled this from the New York Times OP Ed
By NICHOLAS D. KRISTOF
Published New York Times: March 6, 2007
''I was a little Jakarta street kid,'' he said in a wide-ranging interview in his office . He once got in trouble for making faces during Koran study classes in his elementary school, but a president is less likely to stereotype Muslims as fanatics -- and more likely to be aware of their nationalism -- if he once studied the Koran with them.
Mr. Obama recalled the opening lines of the Arabic call to prayer, reciting them with a first-rate accent. In a remark that seemed delightfully uncalculated (it'll give Alabama voters heart attacks), Mr. Obama described the call to prayer as ''one of the prettiest sounds on Earth at sunset.''

Moreover, Mr. Obama's own grandfather in Kenya was a Muslim. Mr. Obama never met his grandfather and says he isn't sure if his grandfather's two wives were simultaneous or consecutive, or even if he was Sunni or Shiite. (O.K., maybe Mr. Obama should just give up on Alabama.)
Posted by ZACTech at 9:55 AM No comments:

Barack Obama is the worst president in history!

"Barack Obama is the worst president in history," "our generation will inherit a weakened country." "Somebody has to go to Washington and knock the hell out of the place." said Ben Quayle.
I am so glad someone has finally stated the obvious truth. I suppose being a student, teacher, community organizer and legislator makes you smarter than a Mayor and State Governor! The standard responses of you are a dumb racist from the left when they have no argument is all I am seeing here. Obama Palosi and Reid are taking America down the path of Communism and Marxism. When is this Chicago style community organizing crap going to be acknowledged and stopped? The violence and discrimination is always coming from the left not the right! They are discriminating against the productive hard working Americans.
Posted by ZACTech at 9:49 PM No comments:

When guns are outlawed then only the outlaws will have guns.

I have no desire to shoot anything. The reason I keep weapons, train and practice self defense techniques is for the protection of myself and those around me that I love. For me it is not an amusement or game as I hate violence but I dislike being a victim even more! One can not rely on others for self preservation cause sometimes the﻿ ones that are supposed to protect you are not close enough or may even be corrupt and intending to harm you. Self defense is a right not a privilege.
Posted by ZACTech at 7:56 AM No comments:

Still little to no coverage by the left biased mainstream media.
Here is an article on the fraud

The Liberals are desperate and resorting to Saul Alinsky like tactics used by corrupt community organizers once again. "It's obvious it's a Democratic play," said Jason Gillman, a Tea Party activist from Traverse City, Mich.
Here is a link to the you tube video of  Tyler in action.
http://www.youtube.com/watch?v=r4bpgnkNN7Q&feature=player_embedded
I am stunned by the lack of coverage by the mainstream media on these happenings could you imagine the out cry if a Conservative tried the same thing.

Posted by ZACTech at 9:11 AM No comments:

Here are some recent statements by politicians that I feel are noteworthy.
House Speaker Nancy Pelosi announced that the House will reconvene for a vote on the $26 billion state aid bill aimed at saving the jobs of teachers and other public employees, while giving the states a helping hand with Medicaid. Is this what you want?
“This has been the my way or the highway administration from the stimulus bill forward,” “Democrats on Capitol Hill and in this administration have slammed the door on republican ideas, have slammed the door on bipartisan proposals.” said Republican Indiana Rep. Mike Pence
"This bill is a brazen attempt to funnel more money to public employee unions before an election at a moment of record deficits and debt.” said Senate Minority Leader Mitch McConnell.
"This election is about jobs. The American Dream is threatened, but Washington continues its reckless spending, massive debt, and tax increases," said Linda McMahon
"Teachers, nurses and cops should not be used as pawns in a cynical political game" resulting from "the Democratic majority's failure to govern responsibly," said David Dreier.
President Obama signed a bill that he says will save hundreds of thousands of teacher and other public workers from unemployment. The $26 billion bill would protect 300,000 teachers, police and others from election-year layoffs almost all are union members. The bill is a blatant giveaway to teachers unions and an another obvious example of wasteful Washington spending.
Posted by ZACTech at 8:09 AM No comments: